That's the title of my first LO that I created with my November Cocoa Daisy Kit when it arrived earlier this month.
(could also be the way I would describe our crops too!!)

This was our family trip to London.
There were 11 of us in total.
My Dad (who was visiting from the US) My sister, her hubby & 3 kids, my brother and us too.
We took the train in and just wandered and wandered.
It was such a fun day.

This photo was taken in St James' park.

Good Morning.
Lovely to wake up to blue skies and sunshine and not that stormy weather.

We are getting excited at Cocoa Daisy this week.
Last night was the November Kit reveal and starting on Friday it's our Fall Crop.
A weekend of challenges, classes, Guest Designer chats, games and lots of chat.
Come and join in.

Here is the schedule. Remember times are EST.

Here's a sneak of my mini book class that gets made in under an hour.

And I'll also be taking this upcycle class too.

I hope you can join us.
It's going to be a great weekend.
Click here to see all the fun that's building already.
Lisa xx

I have a Christmassy Class coming up at Sparkle Dreams in Swindon next month.
It's on Sunday 17th Nov 10.30-1.30pm.
It's a really fun class. 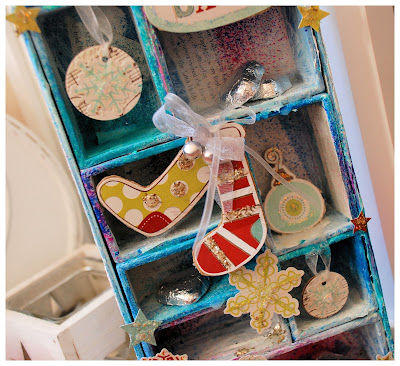 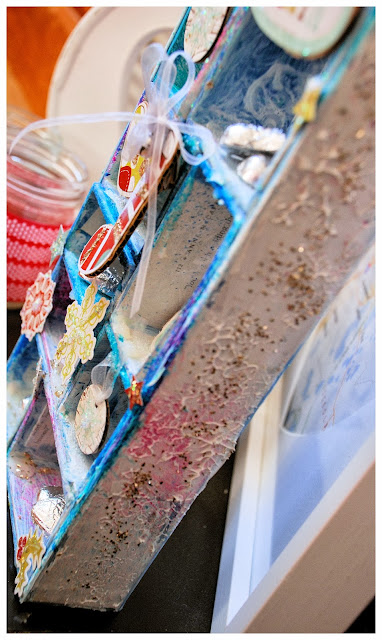 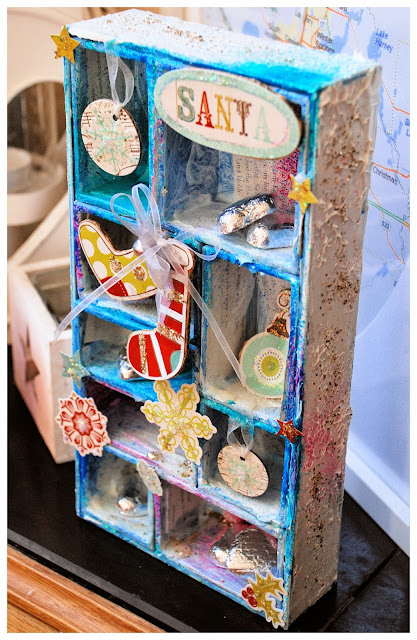 Lots of paints, inks and glitter : )
See here for more details on how to book.

A little catch up from me today.

Today I have a Project Life page over at Papermaze here. 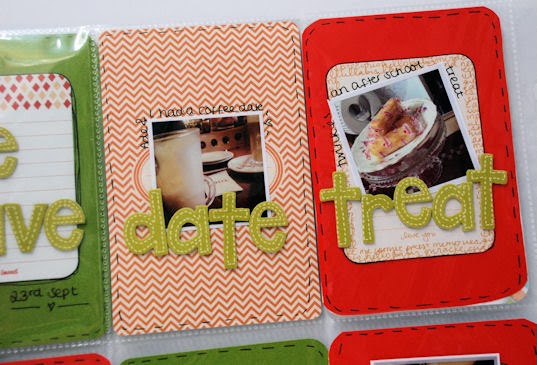 We've been getting very excited over at Cocoa Daisy.
The design team all have their November kits now and we are creating like crazy ready for the crop starting on the 1st Nov.
Will you be joining us?
It's a weekend full of challenges, classes and games and it's all free.
You don't even have to leave your cozy home.
What more could you ask for.
Come and register for free here if you haven't already.
You don't have to have the kits to play along.

And here are some sneaks from the new kit.

I am having so much fun with it.
The full reveal will be on Monday 28th Oct at 8am EST.
Here are some of my sneaks so far.

Hello.
I hope you had a good weekend.

Lets start with something scrappy.
The new Scrap365 Sketch Challenge went live at the weekend.
You can view the sketch and challenge here.
You can play until 15th Nov.
The prize this month comes from Glitz Designs.

My take on the sketch was shown the on Scrap365 blog yesterday. 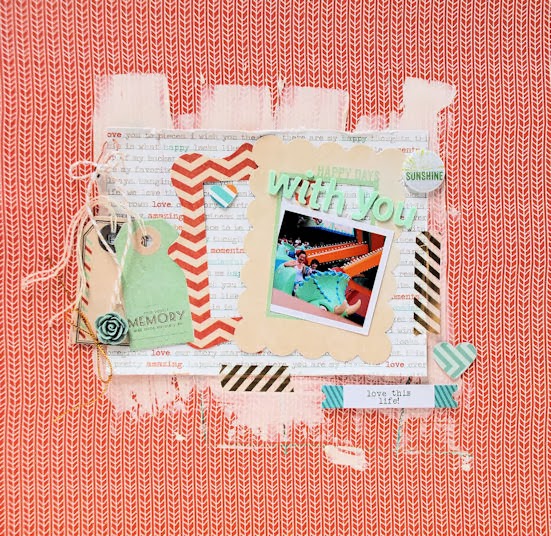 I used the patterned papers from Chic Tags for the first time.
Wow!!
They are amazing quality. So thick. I really like them.
I also used some sweet little Fancy Pants frames, tags and buttons.
This was Louis and I on a ride at Animal Kingdom. 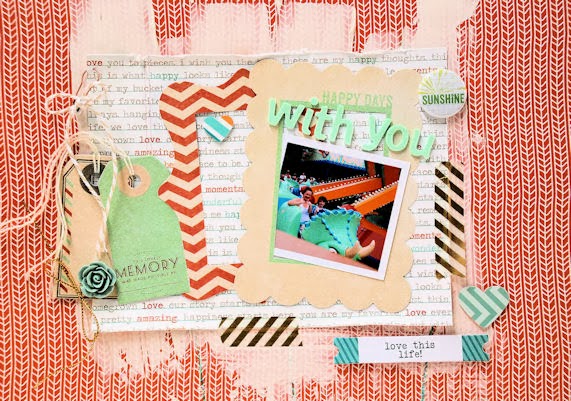 We've had a really busy weekend.
My sister and her family visited on Saturday and watched Louis play footy. They stayed til later in the evening. We just chilled, it was so good. We watched 'Up' and went for an afternoon stroll and I'd made a chili soup  in the crockpot before we went out in the morning.

Yesterday we were out at 8am and got the train with friends into London.
It was pouring with rain but we were hopeful as sun was forecast for 9am and it was pretty spot on : )

We got there for 9.30am, it's the slow train on a Sunday and takes an hour.
We grabbed Costas at Waterloo and went on to the Sealife Centre.
We all have Merlin Passes, so today was a Merlin day : )
No queues and we went straight in.
I was really surprised. After being to Orlando the parks over here just don't match up at all. They are so lame, but the Sea Life Centre was actually really good. It was busy, so it was easy to wander around with the kids and see and enjoy everything. They got hands on with starfish here.

It just amazes me that there are big Tiger Sharks and Penguins living in the centre of London.
Next up was on London Eye, just 5mins in the queue. Merlin passes again.

We then let the kids run around in the play area near the eye.
Louis came to me trying not to cry saying 'I've hurt myself'. He's scraped his face and knocked his eye : ( He was so brave and I ran off to find some ice and came back with a lemonade ice lolly.
Helped with the swelling and tasted good after. It cheered him up abit.

We headed over the bridge and went to Trafalgar Square and then on to Leister Square and China Town. The rain didn't start until we were on our way back over the bridge. We did well.
We got the 3.30 train back loaded with Krispy Kreme Donuts and Costa Lattes.

It was such a good day and we had so much fun.
Louis' eye looks sore today though and he can't open it fully.
It always happens to Louis!!

'COLOUR'
That's the word of the month over at OLW.

What does colour mean to you?
How does it make you feel?

Take a look at the new challenge here.
There's some really inspiring pieces. I'm loving creating alongside these wonderful artists.

Here's what I made. 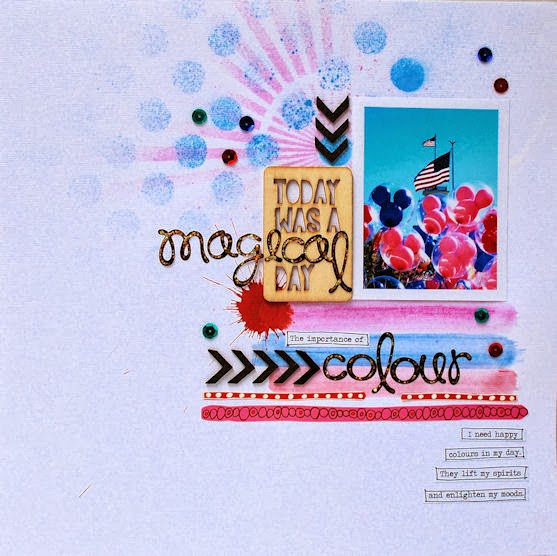 Colour plays a huge part in my life.
It really effects my moods.
I hate dark.
And even have this feeling I get that I describe as being dark.
Some people give me that dark feeling, certain shops, houses.....
I love happy colours and light.
I will even book a hotel room depending on how light and colourful the rooms are. 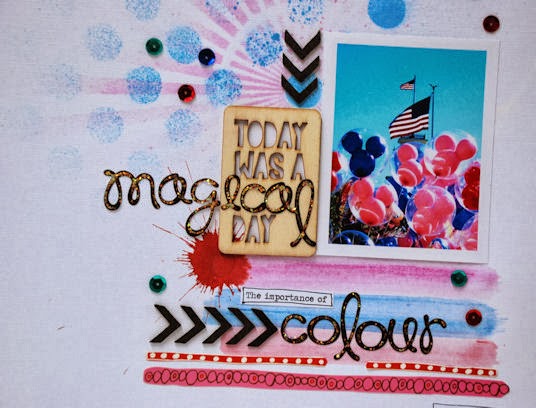 I took this photo on our last day at Magic Kingdom last year.
Anyone who has gone will know that feeling : (
We'd walked up Main Street for the last time and were looking back to the Disney Castle. These balloons just happened to be in view with the American Flag too.
With that blue sky it just made the perfect photo. These are my happy colours. Pink and blues. I just love them. 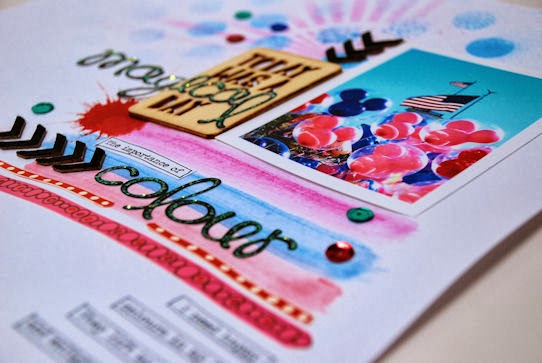 I used some inktense pencils to start and added a little misting.
The long stickers are actually from Love Elsie from years back. I still have loads and love to see them in my sticker basket. They are so bright and fun and shows how long I've been scrapping for : )

Thank you for stopping by today.
Don't forget to scrap your Colour pages and projects too and link up here.

That's the title of todays LO.

This month we are scrapping Jody's style over at Cocoa Daisy. I urge you to take a look here.
Jody has such a fun way about scrapping. She uses these like blocks and adds embellishments and layers and just makes it all come together. I love it.

So I had a go and came up with this. 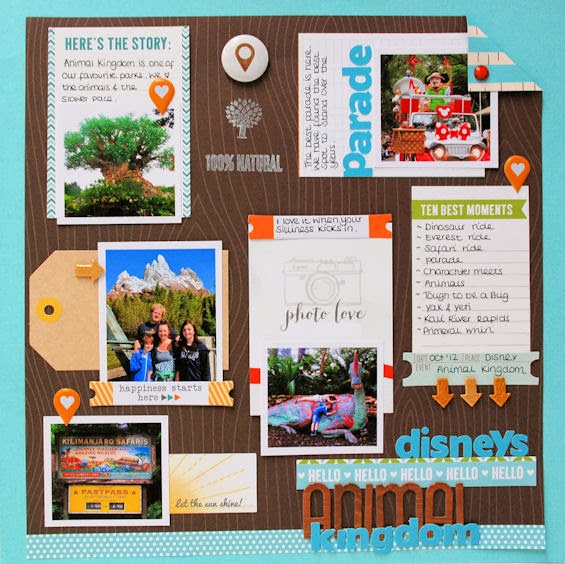 This technique is such a fun way to get multi photos on a LO. I love it!!
If you fancy having a go, come and join us at Cocoa Daisy here.
We are getting excited as it's the Fall Crop coming up at Cocoa Daisy very soon. The 1st Nov : )
We do love crop time.
Tell your scrappy friends about it and come and join us here for a weekend full of scrapbooking and fun.

The Start of Autumn...

It's been a good start to Autumn I would say.
As I'm sat here with the sun shining through my window and an empty bowl of last nights leftover beef stew that I've just had for brunch (don't judge me!!).

The kids have settled in well to school and seem happy.
Work has been really busy, much busier that usual considering between Sept-Dec is usually my quiet season.
There's been lots and lots of this kind of thing.

and this kind of thing. Generally lots of pretty ribbons and sparkle. A nice way to spend the days and evenings, sat making.

And we are now on a very happy countdown as we are now a year until we go to Orlando : )
Sounds long but when you are planning and saving, it flies by. I can't believe it was 1 yr and 2 days ago that we were leaving home to go there. It's just flown by.
We get to book our flights next month : )

I've been trying to keep up with my Project Life pages. I'm still very chilled out about it and just do it as and when I want.
My latest page is over on the Papermaze blog today.  Please do check it out and leave me a little love. 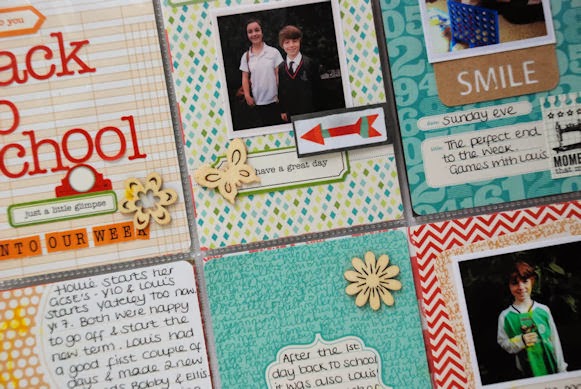 And sticking with the thought of Autumn, I've been enjoying the change of menu these past couple of weeks. Stews, pies, pasta bakes....I just love comfort food.

Last week I made spicy pumpkin soup with fresh bread.

And this week after a really yummy dinner on Monday I'd made apple pie with homemade lemon ice cream. It was the best ice cream EVER!! And I don't usually eat ice cream.

Your 'go to' Design

Do you have a 'go to' design?
A technique that you feel so comfortable with that you find yourself going back to over and over again?
For me it's circles.
I use them in so many different ways and forms.

I've put together a whole blog post dedicated to this over at Cocoa Daisy today. Showing where, why and how's.
Come and see here for some circle inspiration. 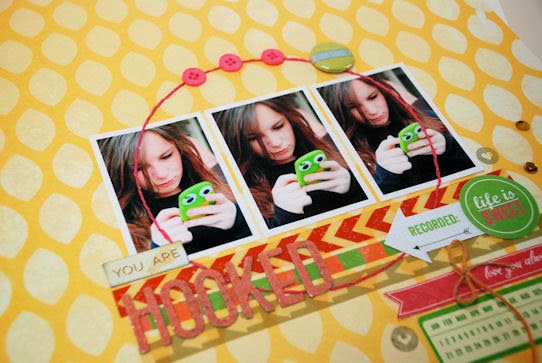 I have been loving the exclusive Cocoa Daisy stamps these past few months.
Having a few stamps arrive with my kit each month has really got me back into stamping again.
I'm often trying to think up new ways of using them.

We are in the midst of a lounge room revamp.
I'm working on creating a gallery wall.
I picked up some wooden embroidery hoops in a thrift shop a while ago. So I thought it would be fun to make my own little piece of art with one of them.
I took one of the kids old cotton school shirts, some inks and the little tree stamps from cd this month and made this.

There's a blog post at Cocoa Daisy this week showing the others ways the team used the stamps.
I think Anna gets the prize this month. I just love what she made.
Take a look here.﻿

Thanks for stopping by.
Have a fab weekend xx
Posted by lisa at 11:50 2 comments:

lisa
United Kingdom
I am the owner of Lollipop Box Club!! Welcome to my little place where you will find me daily with messy painty, inky fingers. You can contact me here: hello@lollipopboxclub.com 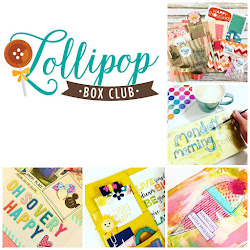 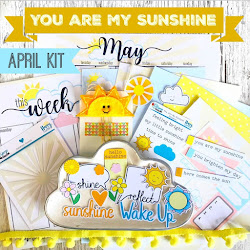 Our Disney & US Trip Reports 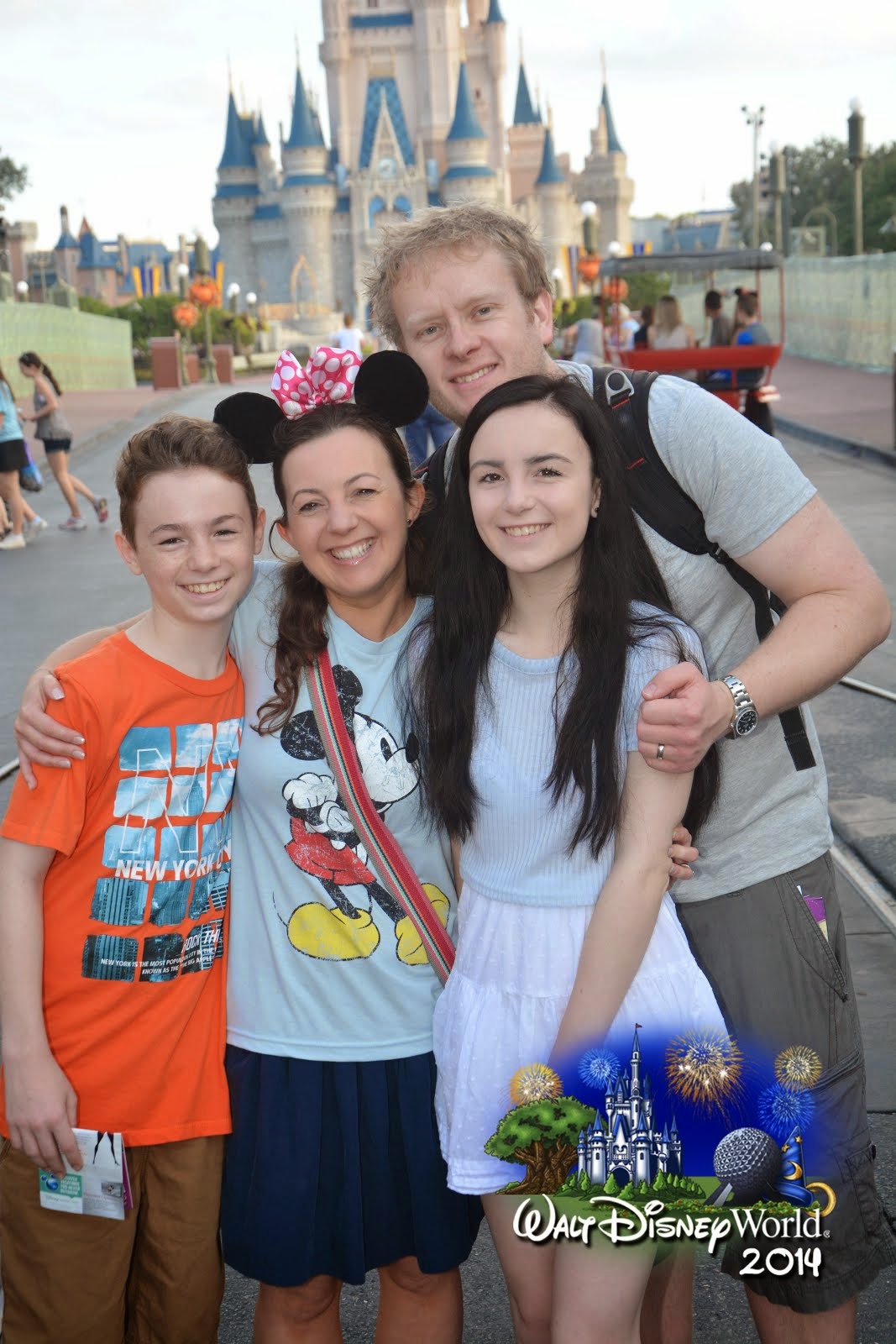